Dear Peoples Center Friends,
As you know, we have been partnering with Repairers of the Breach, the umbrella for the Poor People's Campaign for a couple of years.   As such we have received the information below and attached in preparation for the launch of the Poor People's Campaign at 39 state capitols plus DC tomorrow.  Please check out the link with Connecticut specific information.

The Poor People's Campaign launch in Connecticut will be at the memorial park outside the Legislative Office Building (at the State Capitol) starting at 3 pm tomorrow Monday May 14 with speakers and music and a civil disobedience action for those who have taken the training and signed up in advance.  This week's theme is "Somebody's hurting our people: children, women, people with disabilities in poverty."  There will be an action each week of the 40 days. 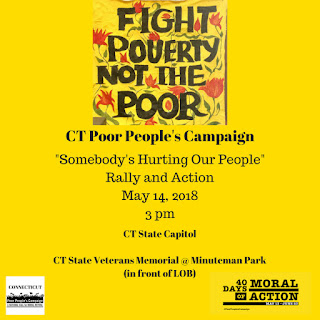 Below are some resources for your state to use during the 40 days of moral action:

Click here for the Week 1 Responsive Reading in English & Spanish

This will be used during the Mass Meeting on Sunday night. We encourage you to share this with faith centers in case they would like to use it during their services on the weekend of the May 17-19.

This can be used to help inform speeches during the 40 days, to pass out at events and to provide language for handmade signs at your rallies.

Attached you'll find a PDF of the Moral Agenda Based on Fundamental Rights.

The Moral Agenda includes highlights from the audit as well as the demands of the 40 days of action.

You can watch the livestream from the Facebook page at: https://www.facebook.com/anewppc/

If you are going to hold livestream viewing gatherings of any of the weekly events, you can click here to let us know.

To listen to the Sunday Mass Meetings in Spanish, you can call-in to the following zoom meeting:

To listen to the Tuesday Teach-Ins in Spanish, you can call-in to the following zoom meeting:

Spanish speakers should still watch the livestream from the Facebook page for the visual at: https://www.facebook.com/anewppc/

Outreach Materials from the States

On Wednesday's National Coordinating Committee call, we heard about some powerful ways that different states are mobilizing and preparing for their Monday actions. They included:

1) Pennsylvania has created a detailed plan for hosting people in the capital the night before the action, providing transportation and childcare. Click here to see their Action MasterPlan.

3) California has done an open call to artists to create images, songs, etc about the weekly themes. You can see the poster below created by artist Ashley Lukashevsky. Attached is the description.