Half of a Yellow Sun, Now on Netflix 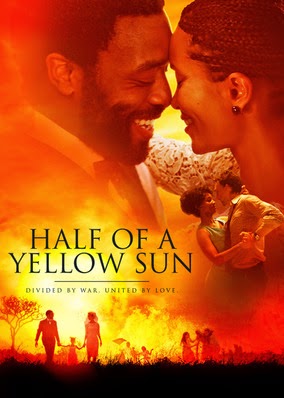 In news that should be music to the ears of many of you who've been anxiously awaiting an opportunity to finally see director Biyi Bandele’s adaptation of Chimamanda Ngozi Adichie's award-winning novel “Half of a Yellow Sun,” and STILL haven't seen it (despite a limited theatrical release, and a DVD release last summer), if you have a Netflix streaming account (or have been waiting for it to get to that platform), you can now watch the film there.
It became available just yesterday.
Produced by Andrea Calderwood ("The Last King of Scotland" and "The Constant Gardener"), “Half of a Yellow Sun” first premiered at the 2013 Toronto International Film Festival. The film follows two glamorous twins, Olanna (Thandie Newton) and Kainene (Anika Noni Rose), from a wealthy Nigerian family, who upon returning to a privileged city life in newly independent 1960s Nigeria after their expensive English education, take very different life paths. Olanna shocks her family by going to live with her lover, the “revolutionary professor” Odenigbo (Chiwetel Ejiofor) and his devoted houseboy Ugwu (John Boyega) in the dusty university town of Nsukka; Kainene turns out to be a fiercely successful businesswoman when she takes over the family interests, and surprises even herself when she falls in love with Richard (Joseph Mawle), an English writer. Preoccupied by their romantic entanglements, and a betrayal between the sisters, the events of their life seem to loom larger than politics. However, they become caught up in the events of the Nigerian civil war, in which the lgbo people fought an impassioned struggle to establish Biafra as an independent republic.