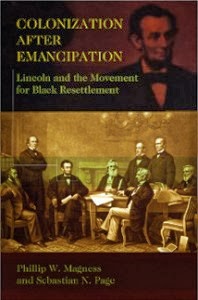 Phillip W. Magness
In June of 1863 Abraham Lincoln entered into an agreement with the government of Great Britain to colonize recently freed African Americans in its West Indian colonies of Guiana and British Honduras (modern day Belize). The document  pictured above bears Lincoln’s endorsement of the project and was produced for Frederick Seymour, the colonial governor of British Honduras. It is one of four known first-generation copies.
The full story of this little-known colonization venture may be found in Colonization After Emancipation: Lincoln and the Movement for Black Resettlement by Phillip W. Magness and Sebastian N. Page