Global leaders call for a major shift to decriminalize drugs 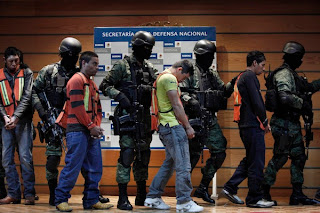 Global leaders call for a major shift to decriminalize drugs - Yahoo! News: "A slew of big-name former politicians are endorsing a report that says the war on drugs is not working and that drug enforcement policy needs to fundamentally change. The Global Commission on Drug Policy will urge a 'paradigm shift' that emphasizes public health over criminalization tomorrow at a meeting in New York City, The Guardian reports.
Those backing the report include former Mexican President Ernesto Zedillo, former UN Secretary General Kofi Annan, former U.S. Secretary of State George Shultz and former Fed Chair Paul Volcker. Former elected leaders of Greece, Brazil and Colombia have also signed on. See the full list of backers here.
'What we have here is the greatest collection thus far of ex-presidents and prime ministers calling very clearly for decriminalization and experiments with legal regulation,' Danny Kushlick, spokesman for the drug policy center Transform, told the Guardian. 'It will be a watershed moment.'"