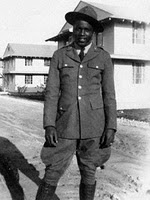 (Ficklin Media Note : Jackie Robinson Also at the post during the war was Jackie Robinson, who later would become the first black to break the color line in professional baseball. Robinson in the early 1940s had gained some fame as a college athlete who had lettered in four different sports at U.C.L.A., but in 1943-44 he was just another Lieutenant at Camp Hood.Robinson had completed Officer's Candidate School at Fort Riley, Kansas, and as morale officer for black troops there he fought against segregation and discrimination. Transferred to Camp Hood, he found Texas laws at this time were even more discriminatory than those in Kansas. On July 6, 1944, knowing that the Army had issued orders ending segregation on military buses, he refused to move to the back of a commercial bus even after ordered to do so by military police and the base provost marshal. He was court-martialed for insubordination, but the trail judges ruled he had acted within his rights.