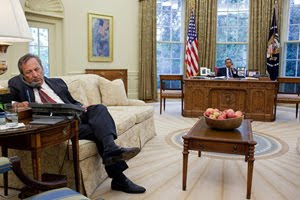 Robert Scheer: They Go or Obama Goes - Robert Scheer's Columns - Truthdig
It is Obama’s continued deference to the sensibilities of the financiers and his relative indifference to the suffering of ordinary people that threaten his legacy, not to mention the nation’s economic well-being. There have been more than 300,000 foreclosure filings every single month that Obama has been president, and as The New York Times editorialized, “Unfortunately, there is no evidence that the Obama administration’s efforts to address the foreclosure problem will make an appreciable dent.” The Times noted that the administration’s main program has been a bust, with only $321 million of the $30 billion allocated to the program having been spent to help folks stay in their homes.