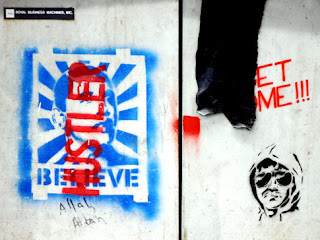 FDNY racism problem grows with latest Presidential disrespect
Defaced image of President Obama placed next to picture of Unabomber on toolbox at Bronx firehouse
A Bronx firehouse is feeling the heat after officials discovered an image of President Obama was painted on a toolbox – and then defaced with the word “hustler.”
An iconic picture of the President above the word “BELIEVE” appears to have been stenciled on a large toolbox visible inside Engine 45, Ladder 58 in East Tremont.
Right across Obama’s face is the word “HUSTLER” in big red letters.