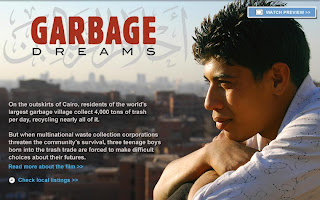 GARBAGE DREAMS | Documentary Film | Independent Lens | PBSOn the outskirts of Cairo lies the world's largest garbage village. A labyrinth of narrow roadways camouflaged by trash, the village is home to 60,000 Zaballeen — Arabic for "garbage people." The Zaballeen have survived for centuries by recycling Cairo's waste. Members of Egypt's minority Coptic Christian community, these entrepreneurial garbage workers recycle nearly all the trash they collect, maintaining what could be the world’s most efficient waste disposal system.
Filmed over four years, GARBAGE DREAMS follows three teenage boys born into the Zaballeen's trash trade: 17-year-old Adham, 16-year-old Osama, and 18-year-old Nabil. Laila, a community activist who also teaches the boys at their neighborhood Recycling School, guides the boys as they transition into adulthood at a time when the Zaballeen community is at a crossroads.
With a population of 18 million, Cairo — the largest city in the Middle East and Africa — has no sanitation service. For generations, the city’s residents have paid the Zaballeen a minimal amount to collect and recycle their garbage. Each day, the Zaballeen collect more than 4,000 tons of garbage and bring it for processing in their village, where plastic granulators, cloth-grinders, and paper and cardboard compactors hum constantly. As the world's capacity to generate trash skyrockets, Western cities boast of 30 percent recycling rates — admirable, until you compare it with the 80 percent recycling rate the Zaballeen can claim.