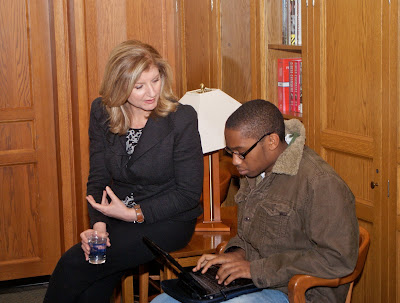 The Yale Information Society Project presented Arianna Huffington on February 22 the at Yale Law School.
This colloquium, sponsored by the Liberty Tree Initiative, McCormick Foundation and the First Amendment Center previously featured Frank Pasquale on Search Engine Law and the First Amendment on February 5. Upcoming speakers include David Post on Protected Political Speech in Email – and Beth Noveck on Open Government and the First Amendment
Arianna Huffington is the co-founder and editor-in-chief of The Huffington Post, a nationally syndicated columnist, and author of eleven books. She is also co-host of “Left, Right & Center,” public radio’s popular political roundtable program.
In May 2005, she launched The Huffington Post, a news and blog site that has quickly become one of the most widely-read, linked to, and frequently-cited media brands on the Internet.
In 2006, she was named to the Time 100, Time Magazine’s list of the world’s 100 most influential people.
http://www.facebook.com/album.php?aid=188378&id=585698688&l=8f70414579