LADIES NITE AT THE YALE REP, FOLLOWING THE PERFORMANCE OF DEATH OF A SALESMAN FEATURING CHARLES DUTTON 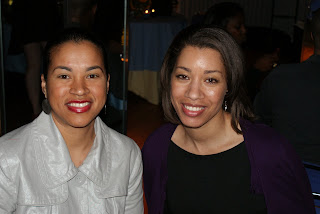 CLICK on link for photo albumhttp://www.facebook.com/album.php?aid=104783&id=585698688&l=40ad9e0973LADIES’ NIGHT
was held on Saturday, April 25 at 8pm at the Yale Rep.
The Greater New Haven Branch of the NAACP rallied to the cause once again in support of the unsung women of the African American Civil Rights Movement at the 8pm performance of Death of a Salesman and a celebration in the Yale Rep Lounge after the show.

From a poetic standpoint this 100 year anniversary of the founding of the NAACP and the 60th anniversary of the Death of a Salesman have much in common. A shared belief in the American Dream is part and parcel of the national organizational mission and the dramatic depiction. Tragedy, small and large, pathos and stony roads trodden whether in family and occupational dream pursuits or in the collective humanity vision quest for respect and dignity,the night demonstrated that the stage and life reflect one another.

(Editor's Note)
URBAN PROFESSIONALS NETWORK
Saturday, May 16 at 7pm
THE UPN, BlackinCT.com, and Yale Repertory Theatre invite you to Death of a Salesman. Join us for complimentary appetizers and a pre-show Meet & Greet. After the show enjoy an exclusive cocktail reception featuring live entertainment.
Come to UPN on May 16 and call 203.909.2780 to take advantage of the group rate already in place. You do not have to organize a group yourself for the May 16 UPN night.
For more information about this event call THE UPN at 203.909.2780 or visit BlackinCT.com.