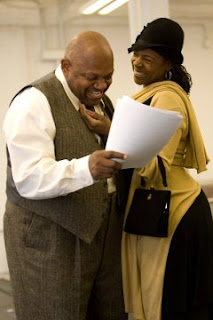 http://www.cpbn.org/?q=node/12936
Actor Charles Dutton must have one of the American theatre’s most unlikely resumes.   Growing up in Baltimore, Dutton dropped out of school and was incarcerated at 17 for manslaughter. While in prison, he discovered a passion for theatre.  After his release, Dutton went on to college and eventually earned a masters at the Yale School of Drama.  His debut on Broadway in “Ma Rainey’s Black Bottom” by August Wilson was called by one critic “the most amazing debut in Broadway history”.  Dutton has performed extensively in television and film, is two-time Tony award nominee and three-time Emmy award winner.    He returns to Yale Rep to play the legendary Willy Loman in “Death of a Salesman”, with an all African-American cast.    Diane Orson spoke with him yesterday and asked him if “Death of A Salesman” still speaks to audiences today.